I chose the Spanish League for my title only because it is the most enjoyable league for a neutral to watch these days, and because the South American Triumvirate and its exploits are the most talked about football events in the world today. 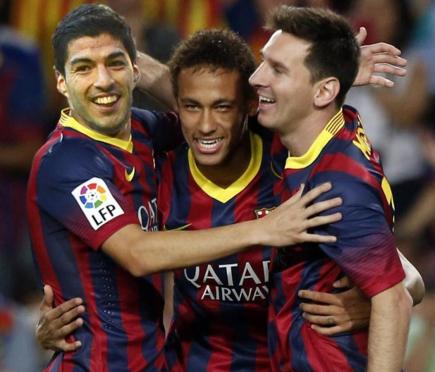 And we know precisely how badly they let down their national teams in the World Cup 2014. Neymar, poor chap, couldn’t play after his injury; Suarez because he drew the wrath of the Western European establishment at FIFA, and got punished beyond all reasonableness; and Messi just couldn’t get the support from his team-mates that comes his way at every Barcelona match.

What we forget when lamenting the decline of the South American game is that like a thousand other professions, footballers also operate in a labour market and the trend over the last few years has been that the best deals are to be had only in the major European Leagues.

A recent Report published by the CIES Football Observatory in Switzerland shows that the number of foreign players playing in European Leagues has reached a record high of 36.1% in recent years, with the top leagues in England, Portugal, Belgium, Germany, Italy and Spain as the major employers:

The trend is reaffirmed if we look at the number of expatriate national caps playing in Europe, with the richest clubs at the forefront in England, Germany, Russia, Italy and France:

As an honorary brasileira (see my ABOUT page), I am proud that Brazil remains the major talent producing country in the football world, but am also dismayed to note that there were no less than 515 Brazilians spread over 31 European leagues in 2012, with varying form and incipient injuries, so how could any Brazilian coach gather together the most talented 22 in time for the World Cup 2014? After all, a country that plays together wins together, and Spain in 2010 had all but one of the championship side playing at home, and most played for just one club – Barcelona. Ditto the mark of Bayern Munich on the German players in 2014. 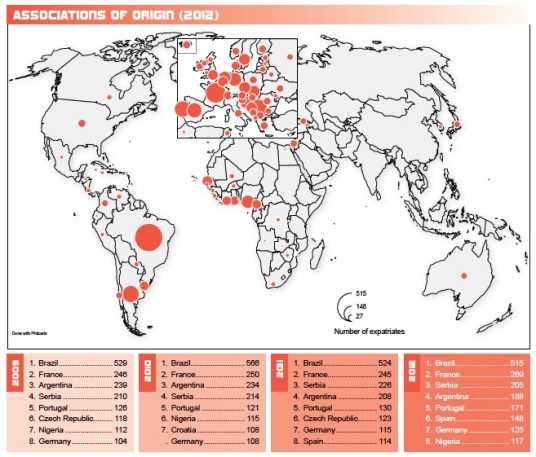 This internationalization of football is inevitable in a fast-globalizing world, but it has killed off the joys of nationalist fervour we saw, once every 4 years. And this nationalism was to be seen in the most positive and joyous terms. Like on the streets of football-crazy Calcutta, where a ‘Brazilian’ brother would face-off against his ‘Argentine’ brother to see who displayed the largest banner. In large parts of Asia, we spelt football as B-R-A-Z-I-L, and when Brazil won (in Asia in 2002) the World won; but when Germany wins in 2014, only Germans win.

Another sad fall-out of the big European clubs cornering the world’s Football talent is that their national teams have started reflecting the same predatory tendencies. And they have the (very convenient) Article 17 of FIFA Rules on the ‘Acquisition of a new nationality’, which states that:

“Any player who refers to article 15 Para 1 to assume a new nationality and who has not played international football in accordance with Art 15 para 2, shall be eligible to play for the new representative team, only if he fulfils one of the following conditions:

It is obvious that the first three provisions will favour former colonial powers – all European – and the last is a way to fast track naturalization of a talented 18 year old, so that he can become a full international player of his adopted country through his prime playing years of 23-30. QED.

It is hardly surprising that the naturalization route taken by countries in Western Europe has greatly enhanced their chances of success in the World Cup – never mind that they have strict anti-immigration rules for other aspiring migrants; and islamophobia, xenophobia and racism are rampant in their societies, which limits all ethnic diversity exclusively to the football field. That’s it.

When you see half a European team not singing the national anthem at the start of a World Cup match, you wonder what happened to the joyous nationalistic fervour I mentioned above…And you know why this is so…

However, despite my despondency at Brazil’s prospects of ever recapturing its past glories, here’s hoping that Latin America will keep the joy alive in football, with a Colombia here, a Uruguay there, and brave little Costa Rica popping up unexpectedly. After all, Brazil played some of its best football under Socrates in the 1980s, without winning the World Cup, and have consistently been a joy to watch in the Confederations Cup – who can forget Ronaldinho running circles around Argentina in 2005, or the rout of Spain as recently as 2013?